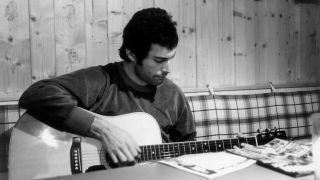 When Freddie Mercury was still Farrokh ‘Freddie’ Bulsara, a student and wannabe pop star at Ealing art college in the late 60s, he kept a photograph of his idol Jimi Hendrix on his bedroom mirror.

“Freddie baby” – as his fellow students called him – would tell everyone that he was going to be famous. “Bigger than Hendrix?” they’d ask. “Oh yes,” he’d reply, “I’m going to be mega.” And yet one of his earliest friends in England also recalls the aspiring singer peering at himself in that same mirror and asking, “Why am I so ugly?”

Freddie Mercury was a man of contradictions: a shameless peacock onstage; shy and insecure offstage. As a teenager, he’d often slip his top lip down to hide his prominent teeth when talking or having his photo taken. He was still doing it after he’d made it in Queen. Watch any of Mercury’s filmed interviews; he never lost the habit. It’s the one trace of Farrokh Bulsara, the man he used to be, that survived the transformation into Freddie Mercury.

Onstage, of course, any insecurities evaporated. What made Merucry such a compelling frontman was his ability to inhabit the character. And ‘Freddie Mercury’ was a character; a persona created by a Hendrix-obsessed teenager who worried he wasn’t good looking enough to be a pop star.

Mercury kept the outside world at arms’ length and never let journalists or photographers get too close. But he understood the power of image. Queen drummer Roger Taylor believes Mercury was a product of mind over matter: “Freddie almost willed himself to become a rock star.” By believing he was a star, others started to believe it too; the unconventional looks didn’t matter.

The photographs in Freddie Mercury: An Illustrated Life plot his development from a gauche schoolboy in India and Zanzibar to a stadium rock star – and all points in between. They capture him in repose, in the studio, away from the spotlight, and in his natural environment: on stage. Whether dolled up in silks and satin during the Killer Queen era or working the crowd at Live Aid in nothing more outlandish than a gym vest and jeans, Mercury’s command of a live audience was extraordinary. The songwriter Mike Moran worked with him in the ‘80s and claims the metamorphosis into ‘that’ Freddie Mercury was almost terrifying: “He turned into this monster of a man – like Arnold Schwarzenegger with a voice.”

The monster seemed to physically grow in stature as soon as the curtain went up or the camera came out. But Mercury also brought a sense of humour to any show. However grandiose Queen became, he was always there with a wink, a grin or a knowing glance, as if to say “Don’t take it too seriously” and “don’t take me too seriously, at all.”

Freddie Mercury: An Illustrated Life by Mark Blake is out now, published by Omnibus Press.