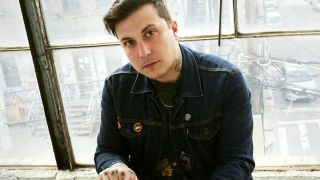 Frank Iero And The Future Violents and Laura Jane Grace And The Devouring Mothers have announced a co-headline UK and European tour.

The run of shows will get underway at St Luke’s in Glasgow on August 26 and wrap up at Munich’s Backstage Halle on September 8.

Support will be provided by Mobina Galore.

Iero says: “I am so excited to be touring with our friends Laura Jane Grace And The Devouring Mothers in the next few months. They are great people, fantastic musicians, and put out one of my favourite records of last year. I really think it’s going to be an incredible set of shows.”

Grace adds: “Over the moon to bring the songs of Bought To Rot to the UK and Europe and honoured to do so in such fantastic company, alongside friends Frank Iero And The Future Violents and Mobina Galore.

“Each night we’ll be playing our record in its entirety as well as a mix of surprises. Hope to see you there!”

Tickets for the tour will go on general sale from 9am GMT on Friday (June 21).