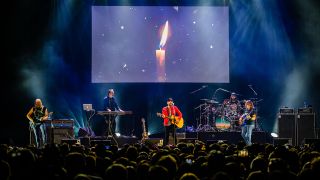 Third Stage: Live In London was captured during the band’s show at the city’s Shepherd’s Bush Empire on December 14, 2019 –  part of Neal Morse, Mike Portnoy, Steve Morse, Dave LaRue and Casey McPherson’s tour in support of their Third Degree album.

It’ll launch on September 18 through Music Theories Recordings on a variety of formats, including, 3LP orange transparent vinyl, Blu-ray, 2CD/DVD, a 40-page Earbook which spans 2CD/2DVD/Blu-ray, and on digital and streaming platforms.

The Blu-ray and DVDs will feature bonus material, including music videos and concert footage from their Morsefest 2019 appearance at Cross Plains, Tennessee.

Midway through the set, drummer Portnoy addressed the crowd, saying: “Welcome to the rarest of all sightings, rarer than a UFO sighting, rarer than a sasquatch sighting – a Flying Colors sighting, here on stage in London.

“This is a very sad night for us because it is the last night of the tour and we don’t get to play together enough, so we’re going to savour every moment tonight and enjoy each and every moment here on stage.”

Reflecting on walking out on stage that night, vocalist McPherson said: “I remember how I felt right before the show in London. I was excited because my oldest daughter and her grandmother were there, whom I love dearly, and felt like I had the show, down by then.

“It's always a good feeling to take the stage when the material is ingrained enough to just let go and let it out!”

He added: “Playing in Flying Colors is like being in a movie. It’s so incredibly powerful emotionally, and to think this was going to be the last show was a bittersweet feeling.

“I love the other guys in the band and we always have such a good time on the road together. Our Chemistry is like really good sushi. There's not one ingredient you could replace and it taste that good. It is one of the kindest and uniquely unified band's I've ever been in.”

To mark the announcement, Flying Colors have released a video showing them playing Mask Machine along with a trailer.

Meanwhile, the band are also preparing to reissue their Flying Colors and Second Nature albums on light blue 2LP on September 18 – with both limited to just 1000 units.