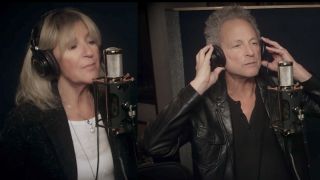 Christine McVie and Lindsey Buckingham in the studio

Fleetwood Mac duo Lindsey Buckingham and Christine McVie have released a mini-documentary exploring the work on their upcoming self-titled album.

The 17-minute film shows the pair in the recording studio, laying down tracks, rehearsing, jotting down song lyrics – and also features footage of Mick Fleetwood behind the drum kit.

The collaboration between the pair began in 2014 when McVie rejoined Fleetwood Mac for their On With The Show tour, with album sessions taking place at The Village Studios in Los Angeles.

“We didn’t go in assuming it was going to be wonderful. We knew we loved each other and we wanted to go in and do it, but whether on not the process would reveal itself to be as enlightening and as effortless as it seems to have been was another question.”

McVie adds: “For me, this is all a fresh beginning because I didn’t even know myself I would end up coming back into the band after so long – and to take off into another level with Lindsay. I guess I rediscovered my love for writing and my love for music.”

The pair released a stream of Feel About You from the album earlier this month.

Buckingham and McVie will play dates across North America this summer, while the duo’s album, which is out on June 9 via East West Records, is now available for pre-order.