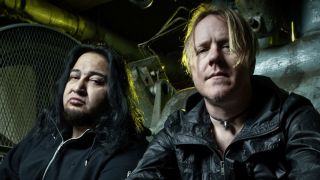 Fear Factory have signed a deal with Nuclear Blast Record for their ninth album, expected next year.

The announcement comes after the band experienced a number of false starts to the project, as their tour commitments expanded on the back of 2012 release The Industrialist.

Guitarist Dino Cazares tells SiriusXM: “We’re doing pre-production right now and we’ll be in the studio next month to track the album. We have a lot of songs written – we’re almost done.”

He describes the material as comparable to their mid-90s output. “I’d say this record would land somewhere between Demanufacture and Obsolete. Each of our records are so different from each other – you always have to experiment and push yourself.” But he adds: “It still sounds like Fear Factory.”

He’s delighted to be working again with Nuclear Blast boss Monte Conner, who’d signed them to Roadrunner in 1992. “It feels very, very good,” says Cazares. “If anybody understands what we’ve been through and what we’ve accomplished, it’s him.”