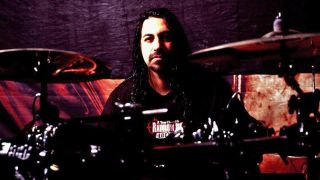 Former Fear Factory drummer Raymond Herrera has slammed 2012 album The Industrialist as stale - because they used drum machines instead of a live musician.

And he reveals he’d considered going digital when the band were making 2004 record Archetype, then changed his mind because he believed it wasn’t working.

The co-founder left the band in 2009, and Fear Factory went on to release Mechanize the following year with Gene Hoglan behind the kit. Then they opted to use computer percussion on their next title.

Herrera tells Metal Wani: “I thought Mechanize was really good – Gene did a great job. It was probably a little too thrashy for me, but for the most part it sounded like they were trying to recapture the Demanufacture feeling. They did a pretty good job doing that.”

But he continues: “The Industrialist I didn’t like at all. I was really surprised that they used a drum machine, because I’d thought about us doing that back when we did Archetype. I played around with the idea of doing the album on a drum machine rather than having to play it.

“But every time it came out really, really stale. Our demos were always with a drum machine, but it always sounded incredibly stale. We were able to come up with a couple of workarounds, but at the end of the day, it just doesn’t sound the same, it just doesn’t feel the same.”

He adds: “I would have loved to hear Gene on that record. I think it would have been way better.”

Herrera is part of the Project Rogue group which aims to raise $70,000 via an IndieGogo campaign to record a new album with members of Cynic, System Of A Down and Napalm Death.