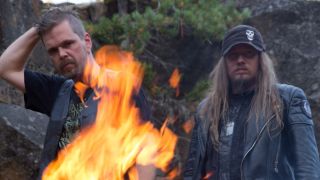 Taken from the forthcoming album, Naturbål (‘Nature’s Bonfire’), out on June 27 via the aptly named Napalm Records, Lågornas Rov (‘The Flames Prey’) is a sweeping, multi-textured journey through the band’s meticulously constructed world, woven from strands of black metal, folk and progressive rock and suffused in strings, keyboards and all manner of flourishes that still manage to stay on the right side of pomp. Naturbål itself is the third of a four-part album cycle, each dealing with a different element, and while this fire-related opus has steered clear from any songs about churches, its far-ranging vision is as unpredictable and spectacular as nature itself. Check out the video and the thoughts of mainman Vintersorg himself below!

“Vintersorg has always been about nature and especially the relation between man and nature. How can you portray that in a video where the song is about fire on a wide scale… a forest fire that ‘eats’ away? Out of the storyline the film company, Twitchy Films, had some suggestions on how we could make this a reality and one of the key points was to actually buy some archive clips of a large-scale forest fire.

“All the close- ups with fire were made by us but with the supervision of firefighters and with no harm to the surrounding nature. To make the video a believable act we actually had to wait for nature to have its pace. We were prepared a long time ago but up here in Scandinavia the snow was a metre high, so we just needed to wait, and that’s kind of what Vintersorg is about; let nature have its pace. Man shouldn’t interfere with that.

“The whole fire-theme can in some sense mean a very devastating episode but still it’s also how nature works and the lyrics deal with that. Fire came and got its ‘prey’ but gave the ash as a fertiliser for new growth; the balance is kept.

“The story with the mom and her daughters came in a bit later as our first intention was to think that all the nature imagery would do the job. But Twitchy thought that the actors would add a more dramatic approach. It also describes how people who live with a close connection to fire and depend on it also need to have a respect for that element – something that the modern ‘town-bird’ doesn’t ever need to think about, except if an emergency takes place.

“The ending is something that I personally feel is perfect for Vintersorg. Nature is everywhere and that night sky symbolises that vastness of space and we’re all a part of that. The other thing near the end is that you only see one of the daughters take that long glance towards the landscape. What happened with the others? Are the gone? Are they there close to her? Or is she seeing something that we can’t? It’s nice to have this open ending to ponder about.”