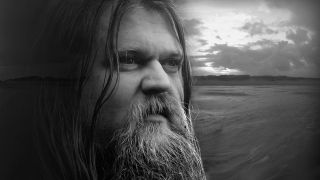 Enslaved guitarist and founding member Ivar Bjørnson has released a new track from his BardSpec ambient project, which he is premiering exclusively with Metal Hammer. Titled Bone, it is taken from the outfit’s debut album Hydrogen, due for release on June 23 via By Norse Music.

“I firmly believe that any metal, or music fan for that matter, with a love of atmosphere, mood and psychedelic grooves in music can find something for them in the BardSpec universe,” Ivar tells Hammer. “BardSpec was my secret project for more than a decade before it came into the light at Roadburn 2015 – and now it is time for the debut album!”

Speaking about the new track Bone, Ivar describes it as “a meditation upon the concepts of strength and endurance, in the micro and the macro.

“How evolution has made us upright and made to be on the move – and how hard it can be to adapt those features into the realms of our psyche – so that we can undergo the mental evolution that is dormant within us.“

Hydrogren is released June 23, via By Norse Music.

To celebrate the release of Hydrogen, there will be a special showcase with Gnaw and Josh Graham’s IIVII in New York on June 29. Tickets are available now.