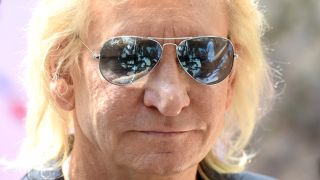 Eagles guitarist Joe Walsh is the latest star to be confirmed as a guest at this year’s Classic Rock Awards ceremony in Tokyo, Japan.

It was previously announced that Jeff Beck’s career will be celebrated at the event on November 11 at the 13,000-capacity Ryogoku Kokugikan Arena, while Cheap Trick, Richie Sambora and Orianthi will also perform on the night.

Now Classic Rock bosses have revealed that Walsh will also be present at the event sponsored by KLab Entertainment, along with Thailand rock heroes Slot Machine.

TeamRock’s Executive Director Alexander Milas says: “Joe Walsh is nothing less than a living legend responsible for some of the greatest songs of our age.

“To say his influence is global would be an understatement, and he’ll be in some fantastic company on the night. Along with Thai upstarts Slot Machine, who prove that rock is a truly worldwide phenomenon, we can’t wait to celebrate this music with some of the greatest music fans in the world.”

The 2016 edition of the Classic Rock Awards marks the first time it has been held in Japan. The 2014 event took place in Los Angeles while at last year’s ceremony in London saw Jimi Hendrix, AC/DC, Iron Maiden, Queen and Alice Cooper named as the big winners.

The Eagles – inducted into the Rock And Roll Hall Of Fame in 1998 – have sold more than 120 million albums worldwide, with Walsh’s guitar work earning him a place on Rolling Stone’s list of the 100 Greatest Guitarists of All Time.

Eagles member Glenn Frey died in January of this year at the age of 67 after a battle with severe intestinal problems.

For more information on the Classic Rock Awards 2016, visit the official website.