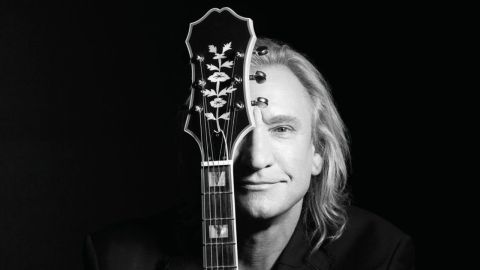 It’s 20 years since Joe Walsh made Songs For A Dying Planet, and aeons since he ventured up Rocky Mountain Way, but the former wild clown prince of rock and long-term Eagle sounds readier than most to leave rehab and get back in the solo saddle.

While it’s small surprise that Analog Man is full of redemption songs, at least Walsh and producer Jeff Lynne stick to what they’re good at. Joe’s a genuine guitar hero and slide master, and flaunts that fact on the title track with self-deprecating lyrical wit.

Wrecking Ball also boasts his trademark ‘attack’ method, while the open-heart theme of One Day At A Time (a regular at Eagles shows) avoids the overly maudlin for the common-touch confessional.

But it isn’t all great: Band Played On overdoes the Earth as Titanic metaphor, and Spanish Dancer is a cliché. But when Walsh pores over his diary on Lucky That Way – an update on Life’s Been Good – he emerges as a decent fellow who doesn’t want to squander his gift.

Fair play to the old smoker.