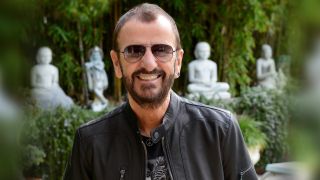 Eagles man Walsh recorded the solo for Postcards From Paradise, the title track of Starr’s 18th solo album, which was co-written with Todd Rundgren.

The ex-Beatle says: “I gave Todd the track and my idea and my words, and he turned it into what it is today. Joe’s a brother-in-law now – he can’t refuse. It needed some of that feeling Joe has. I gave him a call and he came over on a Sunday afternoon.”

The session lasted just two hours – but it could have gone on longer if Walsh had had his way. “I tell Joe, when he’s done a solo, ‘That’s it,’” the drummer, singer and producer says. “He wants to do it and do it and do it. That’s how he is; but I’ve known him long enough to say, ‘No – we’ve got it.’”

Postcards From Paradise is on sale now via iTunes, Amazon and other outlets. Starr will be inducted into the Rock And Roll Hall Of Fame by Paul McCartney later this month.