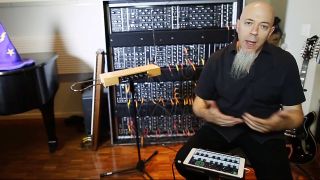 Dream Theater keyboardist Jordan Rudess has released an iPad app which he says will turn the tablet into “the grandest and most epic sounding instrument ever.”

Jordantron offers users access to the sounds he’s used on stage for years – and he admits he’s surprised by how effective it is.

He says: “It’s the first time I’ve officially released the sounds I use in all my live concert situations. I’ve spent a lot of time going through my personal library to see what made the magic happen, taking all those sounds and putting them inside an iPad.

“I’ve been working with Jordantron for a while and it still amazes me to put my hands on the iPad and get the huge sounds that usually come from my larger equipment.”