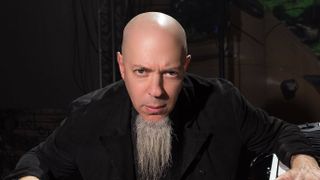 Dream Theater’s Jordan Rudess says his relationship with bandmate John Petrucci reached its most creative point on their latest album.

The keyboard player, who joined the band in 1999, recalls how he was brought in to help Petrucci on the songwriting front. And he says that the relationship has gradually grown into the force that allowed them to work together so well on this year’s release The Astonishing.

Rudess tells Linea Rock: “When I came in, my job was as a composer as much as it was as a keyboardist. But up until recently, many years later, our relationship didn’t kind of mature to the point where we could sit down together and do a project like The Astonishing.

“When John conceived of the story, one of the first things he thought of is, ‘Wow, it would be really cool if Jordan and I could sit down just together alone, without anybody else there, and just write this music.’ And in doing that, it felt like it solidified a relationship that’s been maturing through the course of years.

“It’s always been a really great, symbiotic kind of relationship, but over the last years, especially doing this project, we reached another level where we kind of came together, personally and musically, and enjoyed working on this album. It was really cool.”

The band are on a world tour in support of the album.