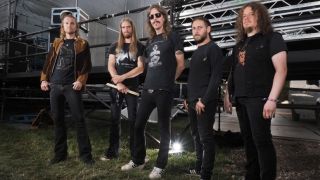 Mikael Akerfeldt says “the essence of Opeth is change.”

The singer and guitarist has admitted the band deal with a lot of criticism from fans as they’ve moved away from the extreme-heavy sound of their earlier years.

He tells Guitar World (via Blabbermouth): “At this point, I think we could probably write the heaviest song we’ve ever written, and unless I scream on it, people would still complain.”

Akerfeldt says that people are “afraid of change” and, as a result, older bands will keep the same sound for decades to please their fans.

He adds: “It seems like those bands have a bunch of records, and the ones that people listen to are fucking old. Anything they do that’s more recent, nobody really wants to hear it. Even if it’s the same sound. So you can’t win, really.

“If we would have never changed, and kept all the ingredients from the first album intact and were still doing that 20-odd years later, I’m not sure if people would be any happier.

Opeth have shows in Luxembourg and Germany this month, before their tour in Australia and New Zealand next February in support of their 12th album Sorceress.

The A-Z of Opeth