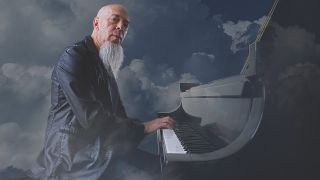 Jordan Rudess has released a lyric video for his new single Why I Dream.

Speaking about Why I Dream, Rudess says: “Trust the cards if you dare… guitarist Vinnie Moore and I trade burning leads in Why I Dream, the lyric video release from my upcoming solo album.

“Wired For Madness serves up a full range of my styles and influences. In Why I Dream, you get a blend of prog rock and fusion with tinges of musical theatre. Enjoy!”