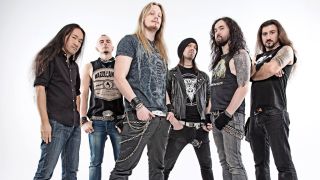 In The Line Of Fire will launch on July 10 and was recorded at last year’s Loud Park festival in Tokyo. And guitarist Herman Li says the reason the band waited so long to launch a live recording was because they wanted to have a wide range of material to showcase.

He explains: “We always held the opinion that if we ever did a DVD we wanted to do it properly. Now, having released six studio albums, we thought we had a great cross section of material to pick from and we knew the facilities at Loud Park made it a great place to film a show.

“Everything just came together and we’re very pleased with the results and hope the fans will be also.”

The DVD package will feature an audio CD of the gig and will also be available on Blu-ray. The band have also issued a video for Three Hammers from the concert.

The UK power metal outfit are currently in the middle of a world tour and will play two shows in Indonesia later this week before heading to New Zealand and Australia. They’re also lined up to play at this year’s Download festival at Donington on the weekend of June 12-14.

In The Line Of Fire tracklist