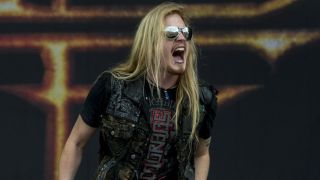 Dragonforce frontman Marc Hudson says the band chose the name of their latest album as it reflects the mood and work ethic of the band during the recording process.

Maximum Overload was released in August via Earmusic. It’s their sixth studio album and the follow-up to 2012’s The Power Within.

Hudson tells Rock Made Of Metal: “We called it Maximum Overload because it describes the music. There’s so much technical guitar playing and technical stuff thrown in there, vocals and everything, so we just thought Maximum Overload encompassed how ballistic we were getting on the album.”

Earlier this year, guitarist Sam Totman claimed the band had scientifically proven their new album was faster and heavier than anything they had done before.

Dragonforce recently split with drummer Dave Mackintosh after 10-years with the band. They brought in Kill Ritual sticksman Gee Anzalone as his replacement.