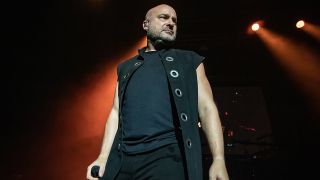 The Disturbed singer was a recent guest on Planet Rock, where he spoke about the challenge of keeping his vocals in top form.

He said: “I’ve always tried to approach how I do what I do the same way I feel that the great vocalists of all time would have approached it – whether it’s Judas Priest’s Rob Halford or Ronnie James Dio.

“I try to be as pure and as direct and as resonant as I possibly can within my own respective abilities – not that I’m anywhere close to either one of those two. They're human freaks of nature. May one of them rest in peace and may the other stay with us for many, many years to come.

“His range, his charisma, his presence, everything about him, just the quintessential frontman.”

Disturbed are currently on tour, with their next two shows scheduled to take place in Russia.

They’ll return to the US and Canada later in the summer for further dates which will stretch through until October 11 in support of their latest studio album Evolution, which was released last year.