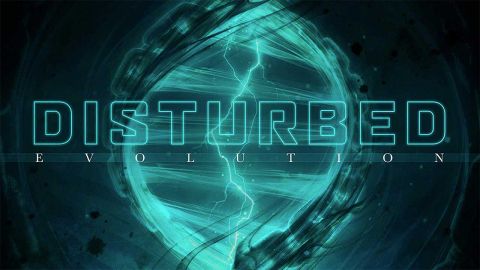 It was an unlikely success story. For years, Disturbed had been covering the likes of Genesis, Tears For Fears and U2 on their albums, so when they recorded Simon & Garfunkel’s The Sound Of Silence for 2015’s Immortalized, they never expected it to blow up so big. Through mainstream radio play and an affective performance on US talk show Conan, they connected with a new audience and ascended to a higher level of fame. Subsequently, follow-up and seventh album Evolution is a Jekyll And Hyde record of two conflicting personalities, which feels like it’s been written to showcase David Draiman’s rich voice.

At one end of the spectrum, there are the big, arena-filling rock songs we’ve come to expect from Disturbed. There’s lead-off single, Are You Ready – which already sounds like it’s been around for years – the stompy, militaristic No More, and the sarcastic Savior Of Nothing. On the other, there are some massive, fuck-off ballads. Hold On To Memories is a saccharine, lighter-in-the-air moment that will make Down With The Sickness fans vomit, while Already Gone is like Disturbed’s own personal Sound Of Silence, full of low notes and drama. In Another Time bridges the gap between styles, but sounds way more wistful and cinematic than it deserves given it’s just about the days before the internet.

By splitting their allegiances, the risk is that Disturbed won’t please either type of fan. The good news is that, despite their overwrought qualities, each slow song is boosted by those impressive vocals, while the heavier ones boast choruses as hooky as his former chin piercings (he’s removed them as he feels too old for them). This is without doubt the most diverse record in Disturbed’s catalogue, and it remains to be seen whether it’s a transition into a new, ‘grown up’ career, or an interesting experiment.