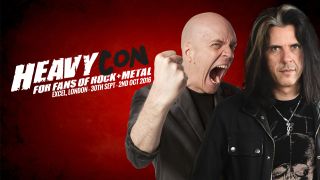 Following on from the mammoth announcement of Gene Simmons, HeavyCon has just announced two of the most exciting and interesting guitarists rock has to offer – Devin Townsend and Alex Skolnick!

Get your tickets for HeavyCon here.

Hevy Devy will be rocking up to the inaugural rock and metal convention for both Friday and Saturday! On Friday he’ll be in the main auditorium as one of the event’s guest speakers and on Saturday he’ll be on-hand to give a guitar masterclass! You could be shown how to shred from the man behind Strapping Young Lad – think of that! He’ll also be involved in Heavycon’s signing sessions throughout Saturday.

Testament’s Alex Skolnick will be in attendance on Saturday and Sunday giving some very special guitar masterclasses of his own. And he’ll be around for signing sessions too! “I’m really looking forward to attending HeavyCon this year,” says Alex. “With the success of events like Comic-Con, it’s nice to see this type of event geared toward the music fan and an honour to be included as part of the festivities.”

“HeavyCon is about putting the world of prog, rock, and metal under one roof,” says TeamRock’s Executive Director Alexander Milas. “We were thrilled to add Kiss legend Gene Simmons last week as one of our headlining speakers last week, and with the addition of Alex and Devin we’re incredibly pleased to introduce instrument masterclasses to our offering. As two of the world’s most respected musicians, we feel the chance for guitar players to sit down and hone their skills with Devin and Alex was just too cool to pass up, and for the non-players, Devin will also be giving an account of his illustrious career in the main auditorium – it’s a story you won’t forget.”

Gene Simmons to appear at this year's HeavyCon