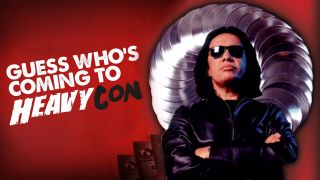 Gene Simmons is the first of a series of stars set to appear at the inaugural HeavyCon, which takes place at London’s Excel from September 30 to October 2.

The Kiss bassist will appear at the convention on October 1 and 2.

Says TeamRock Executive Director Alexander Milas: “There aren’t many better-known figures in the rock world than Gene Simmons. As a founding member of KISS it’s impossible to summarise his contributions, but it’s really his off-stage persona – arguably even bigger than what he does in makeup – that makes him such a beloved figure in our world. It’ll be an honour to welcome him through the doors of HeavyCon later this year – the only rock and metal convention of its kind. Game on!”

HeavyCon is a unique opportunity for fans of rock and metal to immerse themselves in the world they love at the first-ever show of its kind. Rock and metal’s living legends – plus stars-in-the-making and key figures from behind-the-scenes – will be in attendance at the ultimate fan convention alongside gear, stage props and memorabilia that have shaped the last five decades of rock.

A global, fan-driven show, HeavyCon will bring experiences that connect fans further with the music they love through musician Q&As, meet-and-greets, artist workshops, exclusive film screenings, rare and exclusive memorabilia and merchandise from 150 rock and metal stalls – and more!

There are three types of ticket available for HeavyCon.

Get your tickets now!

For more information on HeavyCon, visit the official site.