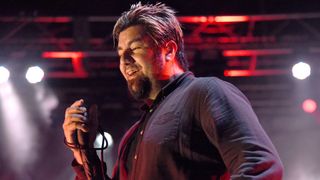 Deftones frontman Chino Moreno says he was so jealous of other bands having their own beers that he wanted to have one named after his group.

Last month, Deftones announced they had teamed up with San Diego brewery Belching Beaver to created their own Phantom Bride beer – named after their track featuring Alice In Chains mainman Jerry Cantrell.

Moreno tells Draft: “I was jealous of other bands putting out beers, loving beer as much as I do. So I pitched the idea of doing a collaboration with a few different breweries, and Belching Beaver was the first one to come back and really be engaged.

“They didn’t want to just slap the band’s name on the bottle – they wanted to know flavour profiles we were into. They actually sent me a bunch of samples of different batches they were testing before going in and making the final decision on the beer, so I felt like I was part of the process.”

He says they decided to choose Phantom Bride as the name of the beer as it will be their next single – and it’s the perfect way to promote the track rather than a standard video.

Moreno continues: “Usually with an album release, you do something to promote the single, like release a music video, which we really hate doing because you’re semi-acting and pretending you’re playing a song. There’s always this level of corniness involved in it. I think this beer is a different, unconventional way of promoting the song.”

Moreno reveals he enjoys drinking IPA so much, that he hunts down local brews when the band are on the road. “It’s a little delight of mine,” he says. “There’s not one city I’ve been to that didn’t have something to offer.

“When I find a good beer, I’ll stock up on it so I can always have it on the bus. And before I go on stage, I’ll have one – sometimes two.”

As for the possibility of more Deftones beers in the future, the singer says: “I’m obviously open to ideas. I enjoy the process and what I’ve learned just working on this one alone. I didn’t expect the turnaround to be this fast. It’s an exciting process. Just getting my feet wet has been a lot of fun, so there might be more of these in the future.”

Deftones continue their live dates in support of their eighth studio album Gore next month.