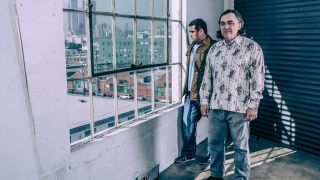 US prog rock duo Days Between Stations have released a video trailer for their upcoming album Giants, which the band will release on September 21.

“I would say Billy was a lot more involved with the writing of this album, in general," explains keyboard player Oscar Fuentes. "He really brought a different type of energy to DBS, a more rock and roll energy.”

“With In Extremis we had the honour of playing with some of our icons, this time we kept it local with one exception, Colin," adds guitarist Sepand Samzadeh. "So Billy, whom we consider the third station, re-joined us. He recorded drums, vocals and bass. Durga McBroom who recorded her vocals on Witness the End Of The World, and of course - our cousin across the pond - Colin Moulding can be heard on Goes by Gravity.”

The artwork for the new album has once again been created by Genesis/Van der Graaf Generator cover artist Paul Whitehead.

"I remember that I took Paul's proof and made a large copy of it, shortly after, when we began recording - Billy Sherwood, Oscar and I - inspired by Paul's painting, used the paintings images and philosophy and developed songs and lyrics," says Samzadeh. "Once we were done and needed more material, we met with Paul and hoped to inspire him with our sonic development. We would go back and forth several times inspiring one another and until the completion of the music and cover art.

“Currently, we just finished scoring for a short film. We are discussing putting a live video/audio album together and performing in 2021. Live shows are now being discussed. Lastly, I am very excited to begin work on the fourth album, as well as a side project with Billy Sherwood."