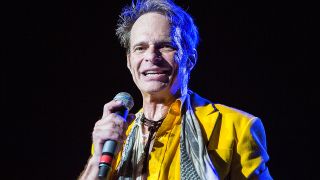 David Lee Roth is to support Kiss on the next leg of their End Of The Road tour across North America.

The run of Kiss shows are set to get under way at the SNHU Arena in Manchester, New Hampshire, on February 1 and wrap up on March 14 at the Cajundome in Lafayette, Louisiana.

It’s not clear if Diamond Dave will support on all the dates, with only some of the venues listing him as special guest.

Following the conclusion of the North American tour, Kiss will play several shows in South America before heading back to Europe and then on to South Africa.

They’ve also lined up further US shows, which will run until October 2, 2020, where they’ll play at Fort Worth, Texas.

Kiss previously confirmed they would bring the curtain down on their legendary career in New York on July 17, 2021, at a venue still to be finalised.

Find a list of all Kiss' End Of The Road dates here.

Before heading out on the road with Kiss, Roth will kick-off his Las Vegas residency at the city’s House of Blues. The run of nine dates will begin on January 8.