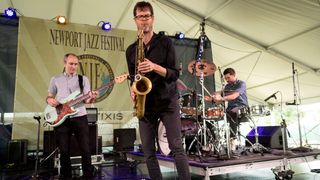 The band who appeared on David Bowie’s last work Blackstar will pay tribute to the late music icon with their upcoming album, Beyond Now.

Saxophonist Donny McCaslin and his jazz group will release the record on October 14. The album includes covers of Bowie tracks Warszawa and A Small Plot Of Land, among renditions of songs from other acts including Mutemath, Deadmau5 and the Chainsmokers.

McCaslin tells Entertainment Weekly: “Looking at him when I was playing in the studio and the conviction and the passion that he sang with, that’s the same way that I play as a saxophone player.

He adds: “The title track Beyond Now is directly inspired by a song of David’s that we recorded during the Blackstar sessions, but that didn’t make the final record. All the originals were written last summer – before he passed away, but while the Blackstar recordings were still really fresh.

“Songs of his were just kind of running through my unconscious. That was part of it.”

Beyond Now is available to pre-order.

Last month it was revealed that upcoming David Bowie box set Who Can I Be Now? (1974-1976), will include his unreleased album The Gouster, which he completed before reshaping it into 1975 record Young Americans.

David Bowie: 1977, back from the abyss and changing music forever...