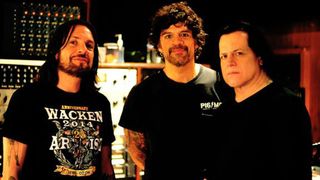 Tommy Victor, Joey Castillo and Glenn Danzig in the studio

Glenn Danzig is in the studio working on his next album – having also put the finishing touches to his album of Elvis Presley covers.

Danzig was joined in the studio by longtime guitarist Tommy Victor and drummer Joey Castillo to record the as-yet-untitled follow-up to 2010’s Deth Red Sabaoth. Further release details will be revealed in due course, and the release date for Danzig Sings Elvis will also be announced soon.

It was confirmed earlier this year that the singer would reunite with the classic lineup of Misfits for the Riot Fest events in Denver and Chicago next month. Danzig hinted that the comeback may lead to further tour plans down the line.

“I’m just going to do what I normally do, which is to go out there and try and have a great time and make sure everybody has a fantastic fucking time. I want them to be so blown away they don’t know what the fuck just hit them.”

Tickets for the events are available from the Riot Fest website.