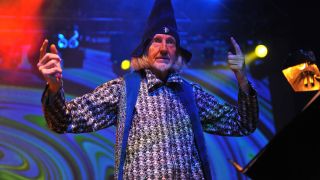 He died in March last year aged 77 – just weeks after reporting he had six months to live as he was suffering from inoperable cancer.

Elevenses will be issued under the Daevid Allen Weird Quartet banner via Purple Pyramid Records on February 12.

It’s said to feature “a mixture of styles of music found throughout Allen’s career, plus a few surprises, including a blues song, a catchy Irish-tinged folk song, ambient and explosive instrumentals and a post-punk rave-up with Daevid’s final message.”

Allen was joined on the recording by Don Falcone of Spirits Burning, Michael Clare of Daevid Allen’s University Of Errors, The Tubes’ Trey Sabatelli and The Muffins’ Paul Sears.

Elevenses is available for pre-order on CD, vinyl and iTunes.