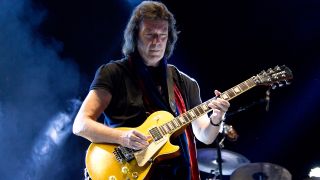 Craig Blundell has announced that he will replace Gary O'Toole as the drummer in Steve Hackett's touring band. The Frost* and Steven Wilson drummer will join up with Hackett for the forthcoming Selling England By The Pound tour once he's completed the current Steven Wilson tour.

"After a few telephone conversations, I’m thrilled to say that I’ve been invited by Steve Hackett and the band to join them on the Genesis Revisited tour from April to November 2019. SH wanted to announce it early to stop speculation and a full inbox daily..

Since I was a kid I’ve listened to Brand X and Genesis and it’s common knowledge that I’m a huge fan of Phil Collins and all of the great drummers that have recorded and played live with Steve. I will do my absolute upmost to respect all that have gone before in this incredible drum chair.

There are still four months of the To The Bone tour with Mr Wilson to go and that’s where 100% of my focus and energy is until the album cycle finishes in early March and we all have a break while Steven comes off the road to write. This time for me will be taken up playing through all the Genesis and SH material and getting it down before band rehearsals start in April.

It is an absolute honour and a privilege to be invited to work with the guys and a challenge that I’m really looking forward to."