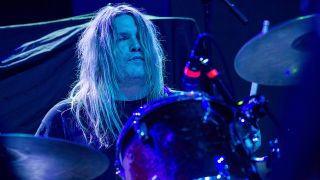 Corrosion Of Conformity have paid tribute to “badass drummer” Reed Mullin who died earlier this week.

News of the 53-year-old’s death was confirmed on the band’s social media channels in a brief statement on Tuesday.

Now they’ve posted a tribute praising Mullin’s broad range of playing styles, saying he could play “one hundred different styles and reference them in his own way.”

Corrosion Of Conformity say: “A badass drummer: Reed could play all of the metal stuff, cymbal grabs, proto blast beats with only one bass pedal. He could cop one hundred different styles and reference them in his own way.

“Everything from Earl Hudson and Clive Burr to Neil Peart (RIP) to Mitch Mitchell and Bill Ward. From John Bonham to Phil Taylor and Nicko McBrain.

“All the while he was creating his own thing, odd times and polyrhythms played nonchalantly, powerful, simple, deliberate sections, all of the possibilities were in fact possible but utilised thoughtfully, in the proper place, for the proper effect, as the song demanded.

“Musically speaking, what more could you ask for?”

Mullin co-founded Corrosion Of Conformity with guitarist Woody Weatherman and bassist Mike Dean in 1982, with the band releasing their debut album Eye For An Eye in 1984.

He returned to the fold in 2010, and appeared on the COC's self-titled eighth studio album in 2012 and also featured on Corrosion Of Conformity’s last two records: IX and No Cross No Crown.