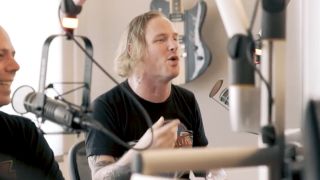 Corey Taylor has responded to Chad Kroeger after the Nickelback man took aim at Stone Sour and Slipknot earlier this week.

Kroeger referred to Stone Sour as “Nickelback lite” and then took issue with Taylor’s past comments where he was alleged to have said that writing a hit song was easy.

Taylor tells Arizona radio station 98 KUPD: “You know what? I’ve never said it was easy to write a hit song. I don’t know what planet he’s living on. Apparently it’s Planet Kroeger – and there must be good weed there because he’s an idiot.”

Taylor reports he was “cued up to say some stuff” about Kroeger but adds: “I just started reading all the comments online. I don’t have to say a damn thing – he is not a liked person.”

Kroeger also took aim at Slipknot in his recent interview, saying: “They had to put on masks and jump around. How good can your music be if you’ve got to beat each other up onstage and throw up in your own masks every night?”

He adds: “I love Mike Kroeger and everybody else in that band I’m very, very cool with – I’ve hung out with them. It’s just ‘Face Like A Foot’ who I can’t really hang out with. He’s got a face like a foot. Am I wrong?

“That’s the hard thing, I can’t even say anything about the band Nickelback, because none of them have an issue with us. It’s him. So, dude, curl up in bed with your Hello Kitty pillow and shut up.”

Stone Sour will release their new album Hydrograd on June 30 and tour across Europe this winter.