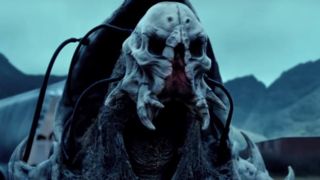 The BBC have released a behind-the-scenes video of Corey Taylor working on the set of Doctor Who.

The episode of Doctor Who Extra follows the Slipknot man as he records vocal parts for a character called the Fisher King, who appeared on the October 3 episode of the hit sci-fi feature.

A self-confessed Doctor Who “fanboy,” Taylor says his visit to the set was something of a dream come true. He adds that his favourite Doctor was Tom Baker, while his son is a huge fan of Matt Smith’s character.

Taylor says: “I’ve been a fan since I can remember. I’ve passed that on to my son. Now we have that in common, so it’s a pretty good feeling.

“I got to be a total fanboy for a good amount of the day. I got to see the Tardis and all kinds of other stuff behind the scenes. And then being able to flick all the buttons, it was just so rad.

“To be able to see everything that goes on in that ship, the way I’ve always imagined it as a fan is just ridiculous.”

As for his part in bringing the villain to life, Taylor adds: “I’ve been doing some vocal stuff for the Fisher King, basically a harsh scream that I incorporate with Slipknot. We’ve been recording different tones and different levels of it to incorporate into the Fisher King’s guttural roar.

“They’ll probably use that and blend it with a few other things to make it completely inhuman and dark. You may think that’s not a compliment, but I kind of love that.”

Slipknot continue to tour in support of 2014’s .5: The Gray Chapter and are planning to follow it up in the next couple of years with a double-length concept album and companion movie in the spirit of Pink Floyd’s The Wall. They play five UK dates in February next year.