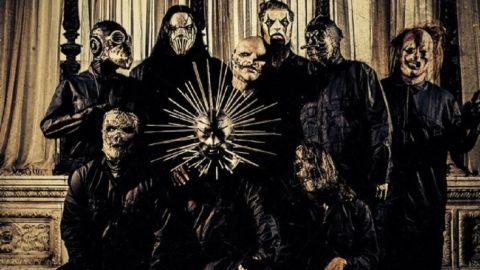 Even for a band so riddled with turmoil, the last few years must have been difficult for Slipknot. The death of the band’s main songwriter, Paul Gray, in 2010 was a firstly a massive personal loss to the members of the band. But his musical contributions will also have hurt them as they began work on their fifth record – an album named in tribute to their former bass player

So to lose their other main songwriter – thankfully, not so tragically – can only have made the process of writing the album harder. Drummer Joey Jordison had long been the intense, highly focussed other main component in the Slipknot creativity lab but his acrimonious departure (the band say he left them, he says he didn’t) has meant a bit of a hole at their inventive heart. Singer Corey Taylor has recently spoken of stepping up to the plate and becoming what he called one of the band’s “chiefs”, but when he last brought a song to the band – the ballad Snuff – Jordison’s view of it was “whatever” while Shawn ‘Clown’ Crahan’s opinion was that it was “a Stone Sour song”, believing it more suited to Taylor’s softer, classic rock-oriented other band. Perhaps, then, Jim Root might be forced to step up to the plate: recently sacked from Taylor’s Stone Sour he admitted he had plenty of anger to work through in the writing process for this.

But, given the complete change in operating procedure, it’s perhaps no surprise that the first Slipknot album in six years struggles to balance all that is good about the band, with new influences that may well be seen as all that is bad. The record opens in grand, cinematic style: XIX broods over a sonic soundscape as Taylor bellows rage and regret defiantly over the top. Sarcastrophe follows, a pummel of riffs and double kick drums that delivers anger and attack in equal measure. But it’s the third song AOV that almost serves as a capsule listen for the entire album. When the song is good, it’s a thrill: a frenzied riff bursts into the heaviest, juddering Slipknot chug in years. It rolls, rollicks and punches through walls: a genuine monster … until a Stone Stour chorus gatecrashes proceedings. Taylor’s clean, melodic vocal line feels all wrong for a track of such power. But these softer edges repeatedly gatecrash the party. In some ways it’s forgivable that Goodbye – a farewell to Gray – is a slow one, but the suspicion lingers that the bassist himself would never have allowed a song of mawkish sentimentality, gentle guitars and power-ballad vocals to ever appear on one of his records. Kill Pop is another song that juts out awkwardly on a Slipknot album: Taylor croons his vocals, the band barely summoning the energy to riff behind him. The One That Kills The Least is the third track that will divide fans – it’s simply too melodic and too timid to give its later blast of riffing any conviction. This may be a new, more mature Slipknot: but who the hell wants Slipknot to be mature?

But elsewhere, there is much to cheer. When the band do what they do best – namely bile, hate and extreme hostility – they are still phenomenal. Custer, three-quarters of the way through the record, is a masterpiece of brutality. Double time drums drive a riff that sounds as if it is has been churned up from the earth’s core. The Devil In I is bombastic and glorious (though flirts with too much melody once more) while Lech opens with Taylor howling “I know why Judas wept motherfucker!” and then alternates between darkness and fury from that moment on.

For a band in transition, shorn of two key elements, this is an album that promises they have a future. There are those who, probably rightly, will wonder in which direction that future lays and how long it will last. Should Slipknot continue down the more sentimental, mature path they touch on too often here, the future may well be a short one. But, if they continue with the rage that illuminates this record so spectacularly in places, they should last for years. Provided they don’t lose any other members any time soon, of course.