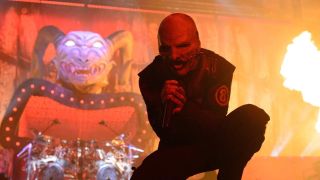 Longtime Dr Who fan Corey Taylor will be heard in the next episode of the BBC series.

The Mirror reports the Slipknot and Stone Sour singer will lend his ­deafening roar to alien warlord the Fisher King in the October 3 broadcast of the sci-fi feature.

Producers reportedly contacted Taylor when Slipknot were on their UK tour in January.

An inside source said: “Production got in touch with Slipknot because they heard Corey and the band love the show. They gave them a VIP tour and asked if Corey wanted to record his famous scream. He agreed instantly and was made up about it.”

Fisher King is played by Neil Fingleton, and his speaking voice is Shaun Of The Dead’s Peter Serafinowicz.

Taylor tweeted: “You have NO idea how hard it’s been to keep this awesome secret…”

Slipknot continue to tour in support of 2014’s .5: The Gray Chapter and are planning to follow it up in the next couple of years with a double-length concept album and companion movie in the spirit of Pink Floyd’s The Wall.