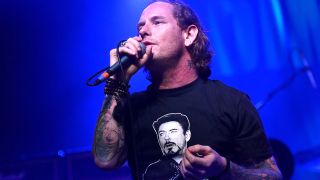 Corey Taylor has given further insight into his upcoming solo album.

The Slipknot and Stone Sour frontman first revealed the project last year, and followed that by saying he had written 26 songs for the record.

Now, in a new interview with Knotfest, he reports the record is “everything I wanted it to be,” adding: “There’s some Slade in there, there’s some Johnny Cash, there’s some Alice In Chains. I mean, big choruses, fun rock, just huge solos — huge solos! It’s incredible.

“Two years ago, I started teaching myself piano just so I could record this song that I wrote for my wife, and I was able to play it and record it. And it’s really good – it’s probably one of the best things I’ve ever written.”

Taylor also reveals that rather than launch a single track from album to announce its release, he’s planning on sharing two songs.

He explains: “The overall vibe of this album is ‘fun.’ You put this on when you want to feel good. There are two songs we’re thinking of releasing at the same time.

“One is the overall ‘crusher’ single – really great with a big vibe, and the other one is just as fun on the other end of the spectrum that people are going to hear and they are going to lose their minds!”

Last week, Taylor shared a short clip from the set of a video shoot, and although he mentioned the name of the song, that part was bleeped out – although he did use the hashtag #CMFT.