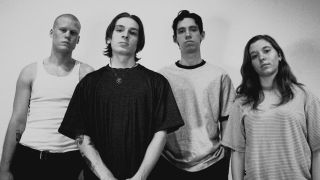 Code Orange have asked fans to support a woman who was seriously injured at the band’s recent gig in Salt Lake City.

Emily Hoffman attended the show last month and while standing at the edge of the mosh pit, she was knocked unconscious when a man she claims was wearing steel toe-capped boots, roundhouse kicked her in the face. Hoffman suffered a broken jaw and had bleeding on the brain.

And after hearing about the incident, Code Orange issued a statement urging fans to help Hoffman’s fund.

They say in a statement: “Please help support our friend Emily. We have all kinds of different people at these shows, and we have to all take care of each other – always.

“We’ve played hardcore shows all around the world and this is the first and only time an injury of this nature has taken place, and hopefully the last.

“We’ve been in contact with her and those around her since the beginning and she knows she’s got our support through this healing process. Our fans are very important to us, and as we continue to grow we all need to protect, support and help each other up.”

Following the incident, Hoffman underwent six-hours of reconstructive surgery and had four metal plates inserted to reconnect her jaw. She faces three-month of recovery.