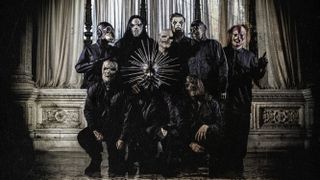 Slipknot’s Shawn ‘Clown’ Crahan says the band have written “about 27 pieces of work” which could make it on to their sixth album.

The band’s percussionist reported in March this year that they were in the early stages of working on the follow-up to 2014’s .5: The Gray Chapter while frontman Corey Taylor concentrated on Stone Sour.

And Crahan says that his ultimate goal for their next release is for it to be a double concept album.

He tells NME: “We have decided to do things differently. Our label had been bought and sold, people who used to give me advice are gone now, we’re still standing. We’re not going to wait around for Corey Taylor to say that he’s ready – no one’s going to wait for me to finish directing a movie. The same thing goes if someone wants to go out on tour with someone else.

“Every three or four months we’ve been getting together and we’ve been writing for up to 30 days. Currently, we have about 27 pieces of work – about seven or eight are completed. They’re not completed songs, that’s far from the truth. That’s where people start fighting over Corey Taylor not being there or Jim Root wanting to do something else.

“We as artists have demanded that we get together every three or four months and blow our brains out with art. We’ve been trying to create as much art as possible.”

Crahan says he and some of the band will get together again in September to work on the 27 pieces they have and add to that total.

He continues: “Our goal is to get to somewhere where it feels like we could have a double album. Whether or not we’ll get to that, I have no idea.

“I’ve been speaking to Corey and Jim and we’re not just going to ‘do it,’ we’re not going to be contrived. It has to be right, it has to work for all of us.”

In June, Taylor admitted he was keen to “write something violent” on Slipknot’s next album, adding: “I want to do something that feels uncomfortable. I want to go somewhere where we haven’t been in a long, long time.

“I don’t know what that means, but I think when I hear it, I’ll know what it is.”

1996: The masks went on, and the Slipknot phenomenon was born