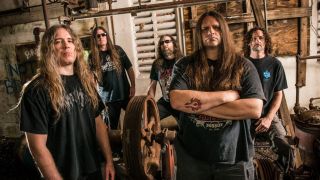 A Russian court has banned distribution of Cannibal Corpse “lyrics and illustrations” – just weeks after the band were forced to cancel three shows in the country.

Russian news service Rapsi reports that the Oktyabrsky District Court of Ufa ruled on Friday that “the translations of lyrics by Cannibal Corpse be banned from distribution in Russia due to violent content.”

The ban also also applies to the band’s illustrations and artwork, with the claimant saying “lyrics by the band Cannibal Corpse could damage the mental health of children because they contain descriptions of violence, the physical and mental abuse of people and animals, murder and suicide – all accompanied by illustrations.”

It is not yet clear whether the ruling amounts to a total ban on the sale of the band’s records, or whether they will be available for sale under certain restrictions. The court said the process would be explained at a later date.

Cannibal Corpse had to cancel three of eight planned Russian shows in October, with a fourth pulled halfway through when the venue was raided by police.

The cancellations came about after complaints from a religious group called God’s Will. Other acts including Behemoth and Cradle Of Filth also ran into trouble win Russia.

On their Russian drama, Cannibal Corpse guitarist Rob Barrett said it felt as though “a wall” had been put in the way of metal bands in the country.