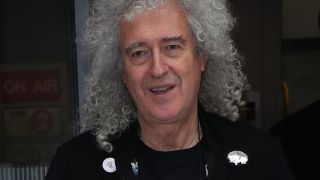 Brian May says it’s unlikely that Queen will ever play Glastonbury in the future, unless “things changed radically.”

The guitarist was a guest on Zoe Ball’s Breakfast Show on BBC Radio 2 this morning (October 25) when a listener wanted to know if Queen and Adam Lambert would play the festival next year.

May responded: “No we won’t – and there are lots of reasons. One of them is that Glastonbury co-creator Michael Eavis has frequently insulted me, and I don’t really particularly enjoy that.

“What bothers me more is that he’s in favour of the badger cull, which I regard as a tragedy and an unnecessary crime against wildlife.

“So no. There’s a little bit of a schism there. I wouldn’t do Glastonbury unless things changed radically.”

May also talked about his Halloween Adventures In Hell Diableries exhibition, and spoke about the Gatcombe Farm project in Devon, which he’s been involved with for the past five years – an initiative he called a “lifetime crusade.”

May explained: “What we’ve done is cleared this farm from being a chronically infected TB farm to a TB-free zone which is big news, especially because we didn’t kill any wildlife or badgers.

“We have all sorts of new techniques which come from the wonderful vet we’ve been working with Dick Sibley down there, so the Gatcomb strategy is something which can save Britain and Britain’s farmers, which is a big deal for me.”

A full article on the project features in Farmer’s Weekly.

Earlier this week, Queen revealed the final results of their You Are The Champions campaign, which saw fans create brand new videos for Bohemian Rhapsody, Don’t Stop Me Now and A Kind Of Magic.

Queen and Adam Lambert recently announced they'd be bringing their Rhapsody tour to the UK and Europe in 2020 – a run of shows that'll include a five-night residency at The O2 in London.

Queen are also the cover stars in the latest issue of Classic Rock magazine, which is on sale now.