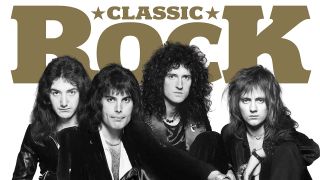 Huge audiences, albums that broke boundaries and amazed, stage shows that astounded and left audiences reeling… These are just a few minor (ahem!) things that Queen managed to achieve in the first few years of their storied existence.

This issue we chronicle the decade that made Queen stars, from their inauspicious beginnings as Smile through to Bohemian Rhapsody (which changed everything), the monster tours, the ups and downs and how they altered the rock’n’roll landscape.

This issue we also look back at the making of The Doors’ The Soft Parade, go on the road with Massive Wagons and The Darkness, set sail with Joe Bonamassa and today’s blues cognoscenti, hang out with Alter Bridge, Michael Monroe and The Sheepdogs, and so much more. It’s been quite the month…

Queen
Their first decade was a glorious hot streak – interrupted by poverty, gangrene and being pelted with hot dogs. Read the true story of the band who were “the perfect animals for the 70s”.

Alter Bridge
With two of their star members returning fresh from solo commitments, they’re back with a blazing new album.

Massive Wagons
Quarry workers, electricians and truckers by day, raucous rockers by night. Double shifts are paying off – with a Top 20 album and the acclaim of some of their heroes.

Bruce Springsteen
The Boss’s latest project is a cinematic exploration and adaptation of his latest album Western Stars. We caught up with him at the Toronto Film Festival.

The Doors
Recorded during a period of problems, unease and controversy, their fourth album, The Soft Parade, was not the record that anyone expected them to make – including the band.

The Darkness
Some rock bands would laugh at the idea of opening for the world’s biggest pop star. For The Darkness, however, it’s the ideal opportunity to rake in new fans. We join them backstage.

The Sheepdogs
They weren’t even born in the 70s, but they’ve made some of the most glorious classic rock of the past decade.

The Virginmarys
Acclaimed and award-winning – then burnt and buried by the industry. It’s been a bumpy ride for the Macclesfield rockers.

The Blues Cruise
We join Joe Bonamassa, Peter Frampton, Bernie Marsden and a raft of other guitar legends – and 2,000 blues fans – on the Keeping The Blues Alive At Sea cruise.

What's on the CD

More special gifts with this issue...

The Stories Behind The Songs: Nazareth
Inspired by another band’s classic track, with Miss Misery they nailed the vibe and ended up with a fan favourite.

Q&A: Michael Monroe
The former Hanoi Rocker-turned-solo force of nature on scary times, wasted years and being in a “hat band”.

Six Things You Need To Know About… Goodbye June
The Nashville powerhouse trio on tragedy, tough competition and swapping the Lord’s music for the devil’s.

Buyer’s Guide: Joan Jett
The Runaway had a Misspent Youth and a Bad Reputation, but her sneers and snarls made her the ultimate queen of noise.

The Soundtrack Of My Life: John Rzeznik
The Goo Goo Dolls frontman on the special records, artists and gigs that are of lasting significance to him.

Classic Rock 268 is in UK newsagents now, and available to buy online.