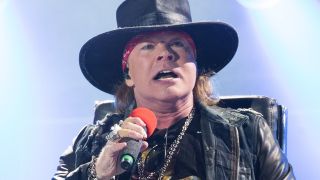 Axl Rose didn’t speak to Brian Johnson before taking over the role of fronting AC/DC.

But the Guns N’ Roses leader says it was only because he couldn’t find the time to make perfect arrangements before the Rock Or Bust shows kicked off at the weekend (May 7).

He was confirmed as stand-in vocalist for the Aussie giants after Johnson was warned he’d suffer permanent hearing loss if he continued to perform. The band experienced negative reactions over the way they dealt with the split, but they’ve insisted they didn’t fire Johnson.

Rose tells NME: “I have not spoken with Brian. We haven’t spoken much about Brian.

“There hasn’t been any negative talk with the guys or anything – it’s just the time schedule of having to get things together for the shows, while I also had Guns N’ Roses commitments, and then breaking the foot.

“The day I found out it was broken I left the hospital to rehearse. My only day off was the surgery day, and the next day was back to rehearsals.”

The singer feels it was worth the effort. “There’s been about 20 rehearsals,” he says. “If I really screw up, they can blame me for that, because I did have good rehearsals.”

Rose previously revealed that he’d made the first move when AC/DC were faced with replacing Johnson at short notice.

Guitarist Angus Young says: “A lot of people were putting people forward. You get a lot of people. The modern world being what it is, everyone’s, ‘Well, I can sing a song.’

Last week a statue of late AC/DC frontman Bon Scott was unveiled in his home town of Kirriemuir in Scotland. But Young says he’s being careful to keep his distance, explaining: “I always check with his family.

AC/DC and Rose continue across Europe, with the rearranged dates in the US still to be announced. The band are cover stars of the current edition of Classic Rock, on sale now in print, digital and via TeamRock+.