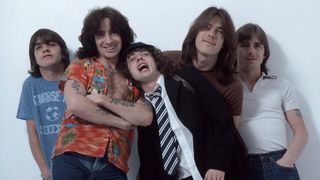 A sculpture of late AC/DC frontman Bon Scott has been unveiled in Melbourne, Australia.

It was revealed last week that a permanent three meter-high tribute to the singer was to be shown to the public for the first time in the city’s famous AC/DC Lane.

It was designed to jut out of the side wall of the Cherry Brick bar in the lane, which also features artistic tributes to the band and rock-themed graffiti.

Scott’s former girlfriend Mary Renshaw and his son Dave Stevens were on hand to officially unveiled the art – along with bar owner James Young who commissioned the piece.

Paul Cashmere was on hand to capture the moment in a clip that can be watched below.

The statue was created by local artist Mike Makatron, who said it was an honour to celebrate Scott and the music of AC/DC.

He said: “I’ve painted the laneway annually for about five years now – always a varied interpretation of the theme of music. It’s an honour to add a permanent 3D element that pays tribute to a great Australian rock and roll band and its lead singer Bon Scott, but also to music in general.”

Scott, who was born in Scotland and moved to Melbourne with his family when he was six years old, died in February 1980 at the age of 33.

Bon Scott - The Man Behind The Myth