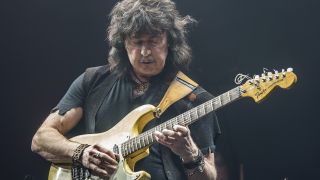 Ritchie Blackmore’s Rainbow have released a stream of their brand new song Waiting For A Sign.

The studio track will be included on the band’s upcoming album Memories In Rock II, which will launch on April 6 via Minstrel Hall Music.

Along with the live music, the DVD will include interviews with the band, crew and also feature backstage footage.

Blackmore said: “Rainbow is part of my life, as is Deep Purple. I just got back together for a few shows because I wanted to have a blast on the Strat.

“That’s always good fun but it’s not something I will do all the time. I might do another couple of shows. Japan wants us and a lot of other places.

“Blackmore’s Night is really my main music – that’s much more challenging. It’s not so easy to play.”

Memories In Rock II is now available for pre-order. Find the cover art and tracklist below.