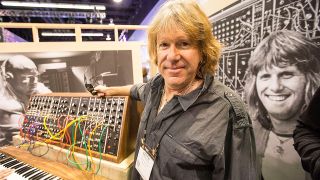 A book of Keith Emerson’s music transcriptions has been released with the full blessing of the late ELP great’s estate.

Selections From Emerson Plays Emerson And Other Works has been complied by a group of fans who were led through the sheet music – which Emerson had been approving at the time of his death – by Jean Casavant and Gianfelice Riccardi.

The 199-page book features 25 compositions and includes a foreword which was adapted from Emerson’s emails about the project along with a previously unpublished poem about the method of composing musical pieces.

Part of the Emerson’s foreword reads: “Imagine my delight when news reached me that people had felt moved enough by my compositions to create transcriptions of them!

“Hopefully they will, in some small way, be useful to the next generation of composers to play and practice upon. I am humbled.”

The independently published book is now available to buy. Find details below.

Selections From Emerson Plays Emerson And Other Works
This collection of 25 compositions by late ELP great Keith Emerson has been compiled by fans. Emerson had been working on approving the volume at the time of his death in 2016.View Deal