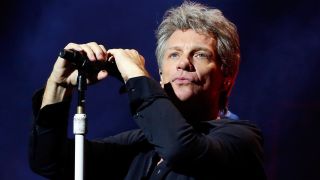 Jon Bon Jovi claims he’s being kept out of the Rock And Roll Hall Of Fame by a “personal mission,” after he fell out with two members of the board.

The band have been eligible for entry since 2009, and the frontman believes they tick all the boxes necessary for induction.

The nominations for the class of 2017 include Pearl Jam, Journey, Bad Brains, ELO, Yes and Jane’s Addiction – along with Chaka Khan, Janet Jackson and Tupac Shakur.

Bon Jovi tells The Howard Stern Show: “There’s guys on that thing that have made it their personal mission to fuck with me.

“And that’s okay. I get it – I’ve sold more records than their artists.”

Without naming names, he continues: “I called him a few choice words, and I’m never shy, when I see him, to call him a few more choice words.

“The criteria is that your music had an influence on generations that came after you, and that it’s still out and very present. We have every criteria.”

Asked who would argue against the band’s induction, Bon Jovi replies: “These two fuckers in the room.”

Meanwhile, former Pearl Jam drummer Dave Abbruzzese has said he’s “not angry” with the band or the Hall Of Fame, after being left off their induction nomination.

He’d previously called on his former colleagues to “do the right thing,” adding: “They can’t justify ignoring my contributions – like me or not.”

Now he says: “I understand there may be some flaws inherent to the balloting process. I reacted emotionally, and my reaction was based on a lack of understanding.

“I’m not looking to ruffle any feathers.”

Public voting for 2017 induction runs until December 5, with the public allowed to vote once a day until then.

Readers poll result: Iron Maiden for the Rock And Roll Hall Of Fame