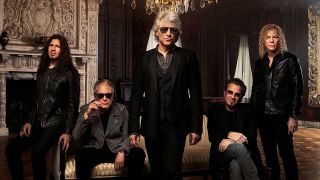 Bon Jovi have made the decision to cancel their entire summer tour rather than postpone it to allow fans to use refunds for essential bills and shopping.

The band had lined up a total of 18 shows with special guest Bryan Adams, which were due to get under way at the Tacoma Dome on June 10 and wrap up with two nights at New York’s Madison Square Garden on July 27 and 28.

Bon Jovi say in a statement: “Due to the ongoing global pandemic, it is no longer feasible for Bon Jovi to tour this summer.

“Given these difficult times, we have made the decision to cancel the tour entirely. This will enable ticket holders to get refunds to help pay their bills or buy groceries.

“These are trying times. You’ve always been there for us and we’ll always be there for you. We look forward to seeing everyone again on tour when we can all safely be together.

“We will continue to send out news and updates on Bon Jovi touring in the weeks and months to come.”

The news comes just days after Bon Jovi keyboardist David Bryan confirmed he was COVID-19 negative after contracting the virus five weeks ago.

He said on Instagram: “There are people who have no symptoms, people who got sick like me, people fighting for their lives and people who sadly have lost their lives.

Bon Jovi will release their new album titled Bon Jovi 2020 on May 15. The follow-up to 2016’s This House Is Not For Sale will include the tracks Unbroken and Limitless.

Got my test back today. Thankfully I’m Covid-19 negative! 5 weeks to the day that I got sick... I’m a very lucky guy! ⭐️ There are people who have no symptoms, people who got sick (like me), people fighting for their lives and people who sadly have lost their lives. This is a nasty virus BUT science/medicine will conquer all. Thank you to all for your well wishes. Thank you to all the Doctors and Nurses and all on the front lines. You are the true heroes! ✨ David Bryan

Bon Jovi: Bon Jovi 2020
Bon Jovi will release their new studio album Bon Jovi 2020 in May. The follow-up to This House Is Not For Sale will include the singles Limitless and Unbroken.View Deal