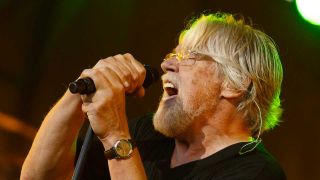 Bob Seger has announced that upcoming current tour will be his last. The singer, who was forced to cancel a run of dates last year due to a back injury, has now confirmed that the rescheduled shows – as well as some further dates to be added – will be his last.

A statement on Seger's website reads, "After a career that has spanned more than 50 years, Bob Seger & The Silver Bullet Band will hit the road for one last time on their final tour. More dates are being added to Seger’s previously announced dates, giving fans one more opportunity to see Seger and the band live. The Travelin’ Man tour kicks off on November 21 in Grand Rapids.

"Additional shows will be announced in the coming weeks, including dates in Las Vegas, Fresno, San Diego, Vancouver, Florida and more."

Earlier this year, Seger told Classic Rock, "I hope this pain goes away, ‘cause they can never really guarantee it — and if it doesn’t, then I’m done, dude. But that’s what the doctors have to say. I think it’s gonna be okay, I really do. But, God, it’s taking a long time."

In July, an album of singles Seger recorded in the 1960s with his band The Last Herd was announced. The album is already out in the US, and will be released in the UK on  October 5.