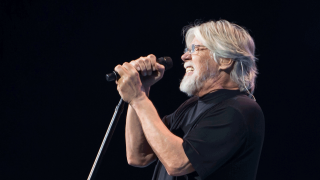 As you a read this, Bob Seger is either getting ready to play some more old-time rock and roll or is readying his Famous Final Scene. The venerable American rocker was in the midst of a new tour when a ruptured disc in his back required spinal surgery (a cervical laminectomy, if specifics are required). It brought him off the road in late September.

It was a momentum-halter, of course, but that didn’t stop the Rock and Roll Hall of Famer from releasing his 18th studio album, I Knew You When, in November. The set, a lamentation over the death of his good friend, the Eagles’ Glenn Frey (along with political overtones via covers of Lou Reed’s Busload Of Faith and Leonard Cohen’s Democracy) debuted at No. 1 on Billboard’s Top Current Rock Albums chart and No. 25 on the Billboard 200. “Down and out” — albeit, he hopes, temporarily — at this suburban Detroit home, Seger, who produced I Knew You When, spoke about the album as well as his hopes, plans and prospects for the future…

First things first – how are you feeling?

I’m in the recover mode. The pain is down. I’d say it’s one out of 10, but it’s constant. It’s nagging, and unfortunately I can’t sing or play or lift anything more than five pounds until it’s gone. So it’s difficult to work out or anything. I can walk, that’s about it, work with my three-pound weights a little bit, but no over my head. It’s maddening. I’m just stuck here. I can’t go to a show, I can’t go to a game, that’s it.

And the doctors just tell you to behave and keep your eye on the prize, right?

Yeah, that’s it! They warned me of this. They said it was going to really hurt for about three months afterwards, but the payoff is they didn’t go anywhere near my larynx. They went in the back, so my voice is probably fine. I hope this pain goes away, ‘cause they can never really guarantee it — and if it doesn’t, then I’m done, dude. But that’s what the doctors have to say. I think it’s gonna be okay, I really do. But, God, it’s taking a long time.

Has this enforced time off allowed you to reflect a little more on I Knew You When than you might have if you had been on tour, as planned, right up to the release date?

Y’know, I worked on that album for a year and a half solid, so I’m very well-versed on the album. What I’m doing now is the only thing I can do, which is listening to a lot of music, just studying different people that I really like, maybe do a little bit of writing before the tour [resumes], if we can go back out.

The album is dedicated to Glenn Frey, who of course was your good friend from the sixties in Michigan.

About three months after he passed I did his memorial in L.A. That had about seven thousand people. Everyone was there — even [original Eagles bassist] Randy Meisner and J.D. [Souther] and Bernie Taupin. I saw everybody. About a month before that I got the idea of listening to some of my old songs, and I found I Knew You When and I thought, “Oh my gosh, this even sounds faintly like an Eagles song. This is perfect,” and I said: “That’d be a great title for a Glenn tribute record,” y’know? So when I saw [Frey’s widow] Cindy in LA I asked her, “Would you mind if I did that. It’s your legacy. I don’t want to mess it up.”

She said: “No, I’m sure it’ll be in good hands with you” and I said: “Okay, that’s what I’m gonna do,” and that was the beginning of it. I had I Knew You When, that was it. Then I started studying the old stuff and writing new stuff and recording a couple of covers, and a year and a half later it was done. I really took my time on it. It’s a little bit political, but most of it’s about Glenn.

How are you feeling as you watch so many of your peers, and others, pass away on us?

Oh my God… Y’know, Leonard [Cohen] passed and Lou [Reed] passed in ‘13, and that was a heavy hit, too. And then of course [Little Feat drummer] Richie Hayward, who’s playing drums on four songs on the album. And then Gregg [Allman] died and [Tom] Petty died. I probably would have done some nod to all of them [on the album] if I’d had time, but I turned it in on July 1 and just didn’t have the time, and that was just to get it out when it came out.

What’s the time span of the songs on the new album?

Boy, Runaway Train goes about twenty-five years back. I Knew You When was from back around 1997, and I found one I’d recorded in 2012, I’ll Remember You and I said, “Oh, that’s nice,” and I wrote Glenn Song… They’re from all over the place on this one.

Blue Ridge is one of the songs that go back a way, the late eighties or early nineties.

Blue Ridge is about the Civil War, and I thought it was kind of a nice metaphor for what we’re going through right now. I mean, gee, have you ever seen the country more divided politically? It’s kind of like a political civil war right now, everybody just divided down the middle. I thought that song just made sense right now.

It probably goes without saying that you are not a Trump supporter?

Oh my God… Let’s put it this way; When I went and sang for the Eagles at the Kennedy Center Honors I met Barack Obama. Now, Barack Obama is my favorite president in my lifetime. So we’re in the Blue Room, all the cast that’s going to be on stage doing all the songs, and I’m sitting next to Steven Colbert. After Obama got done talking and introducing the honorees, he went into another room and we all started filing out and we all got to meet him and Michelle and shake hands. I only had a second to talk to him so I said: “I gotta tell ya, Mister President, thank you for your wise and dignified service,” and that was it. That was a much time as I had. And look what we’ve got now. So there you go [laughs].

What’s the story with Marie?

Marie is really kind of a Leonard Cohen song; It’s like me trying to do Leonard Cohen. It’s about seduction. It’s about a lot of things, but it’s very Leonard Cohenesque – it’s very minor key, it’s got flamenco guitar, the girls are doing the waltzes in the background. I just thought, “Oh, that’s cool…”

But then Leonard dies six weeks later and shortly after that I did the Kennedy Center and I ran into Bonnie Raitt and some other old friends that were on the show and I said, “Y’know, I’m thinking about doing Democracy. I’ve always loved that song.” They said, “Oh, I think that would be a great idea.” So that was the next song we cut and it just went on from there. I think about eight months later I started thinking about Lou Reed and Busload Of Faith.

Another interesting choice. What led you there?

I love the imagery of that, a busload of people going to work. Maybe they can’t’ afford a car. Maybe they can’t afford gas for their car. So they take the bus, and I loved that image. I always did. I always loved that Lou Reed song, and I thought, “Well, that makes sense today with the great economic divide we’re in.”

You changed some lyrics around in the song, including one that makes specific reference to Trump.

I went to Lou’s estate and told them what I was going to do. I said, “I’d like to drop the one verse about rape and abortion and all that, and I’d just like to drop four references to religion that are kind of negative. I changed five lines and that was it, and I dropped one verse and they were fine with that. They said, “Go ahead,” so I did and there you go. I love the last line, “You can’t depend on the water.” That’s a little tip of the hat to Flint, those poor people.

You mentioned maybe doing some writing while you convalesce. That would seem therapeutic…

What I’ve been doing is going back and listening to my favourite groups, my favourite singers. So I’m listening to a bunch of stuff since I can’t do much of anything else. So rather than waste my time and watch TV or something, I just listen to a lot of music right now and I’m going to keep drilling myself with music that I like and analysing it — Why do I like this? Why do I like that? — and get ready for writing. That’ll be the first thing I’ll do, a little bit of writing, and then hopefully I’ll have to start rehearsing for the shows. I really hope I’m not done.

I Knew You When is out now.

Every Bob Seger Album ranked, from Worst to Best