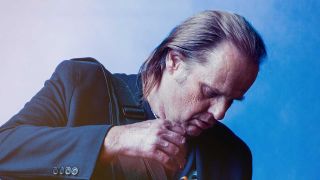 Walter Trout has lined up a nine-date UK tour for October. It kicks off in Exeter on October 3 and climaxes in Sheffield on October 12.

The tour is in support of Trout's album of cover versions, Survivor Blues, which was released in January.

Says Trout: “I’m riding in my car sometimes, and I’ve got a blues station on – and here’s another band doing Got My Mojo Workin’. There’s a little voice in me that says, ‘Does the world need another version of that song?’

Trout adds: “My idea was to do these songs like me, to arrange them for my band and style – not to just copy the originals note-for-note.”

In 2013 Trout was struck by liver cirrhosis and hepatitis C and eventually ended up in a coma, an experience documented on 2014’s Wastin’ Away album.

“I feel like I’m in the best years of my life right now," says Trout now. "I feel better than I have in years physically. I have more energy. I have a whole different appreciation of being alive, of the world, of my family, of my career.

"I want life to be exciting and celebratory. I want to dig in. I want to grab life by the balls and not let go, y’know…?”