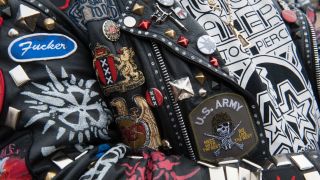 Bloodstock is just around the corner and we know you're as unprepared for festivals as we are, which is why we've put together this list of everything you'll need to survive the weekend – including drinking horns, corpsepaint and a lot of denim.

Turns out Vikings didn’t really decorate their military headgear with ox horns; more like they were such double-hard bastards they went into battle helmet-free. Celtic and Germanic tribes used ceremonial horned headdresses, while Herodotus described the horned helmets of the Thracians, a group of tribes neighbouring Ancient Greece who were totally psyched about seeing Amon Amarth.

Vikings definitely had these, although cow and goat horns – as well as glass, clay, ceramic and metal horn-shaped vessels - had been filled with mead and passed around Europe since the Bronze Age. Nowadays plastic is favoured, and although they’re harder to put down than a bottle or a pint, why would you want to put your drink down at a festival in the first place?

Taking the sword/helmet combo to another level of dedication and madness are those hardy souls who sally forth into vast crowds in sweltering sunshine wearing full battle armour. However, Bloodstock’s medieval knights are better equipped than most, as the festival hosts the scrupulously authentic reenactment tournament Battle Of The Nations.

When Bloodstock began in 2001 it was about the only public place in Britain where you could actually see one of these mystical 1980s garments, after they disappeared from view in the grunge era. Nowadays, aided by James Hetfield, they’re the height of cool, Papa Het affecting a retro waistcoat onstage since 2012, crammed with early NWOBHM influences like Vardis, Weapon and Witchfynde.

Originally, camouflage combat trousers were designed to help ground troops blend in with their surroundings in forests and jungles. These days they serve much the same purpose at metal festivals, where most legs are identically clad in a knee-length variation on the evergreen army surplus essentials – bonus points if you cut yours off yourself with a penknife.

Another hardy perennial of the metal festival circuit, the bullet belt - or bandolier as Budgie would say – is second only to the nail-spiked armband in the world of wantonly aggressive accessorising. However, if you’re travelling to Bloodstock from overseas you might rather leave yours at home – Morbid Angel’s Dave Vincent was arrested for taking his through Milan Airport.

Whether it be the black-and-white corpsepaint of the early black metal scene, the woad and war paint of the folk metal warrior massive, or you’ve just visited a face-painting tent to slap a tiger, Union Jack or Darth Maul over your face, it’ll still end up running down your neck and shirt as soon as you attempt the moshpit in August afternoon sunshine.

Strange to think Cradle Of Filth’s ‘Jesus Is A Cunt’ back-print is by now a British fashion institution; stranger to think it seems the height of witty sophistication next to the dipshit misogyny of recent designs by Emmure (‘Keep Calm And Ask Your Girl What My Dick Tastes Like’) and I Declare War (‘Fuck Your Tits, Show Us Your Cunt’).

However scorching the sunshine, many metalheads prefer to protect their traditionally pasty, pallid bodies under layers of denim, leather and hair, but if you plan to expose any skin, don’t make an enemy of the sunblock. By now you’d think L’Oreal would have spotted a gap in the metal festival market and launched Factor 666 Sun Destroying Cream.

Bloodstock takes place at Catton Hall, Derbyshire 7-10th August and is headlined by Down, Emperor and Megadeth. Get your tickets here.