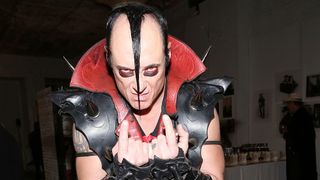 But Only believes there’s more to come after the trio play together for the first time since 1983.

He tells 97.9 The Loop: “We’re a legendary act. We need to live up to what people conceive us to be.

“The beauty of it is, Glenn’s in great shape and my brother looks like freakin’ Hercules. I’ve dropped about 20 pounds.

“I rehearse the set about three times a night. It’s going to be us on top of our game.”

He reports that the festival set they’ve planned features 22 tracks, chosen by Danzig. “It’s his baby,” he says. “We’re probably going to shoot for about 30.”

The idea of playing further shows has already been discussed. Only adds: “If we can live up to, and exceed, what people believed us to be, we’re going to try and keep going.”

Only and Frankenstein won the rights to the Misfits name following their 1983 split with Danzig and went on to tour with several lineups. The relationship between the two parties was strained on several occasions.

Earlier this year Only told how the reunion came about as a result of a lawyers’ meeting, arranged with the intention of ending the spate of lawsuits that he and Danzig had launched against each other.

He said: “We were never not friends – we were just adversaries. It was turning into another court battle, and it turned into a reunion.

“We walked out the door knowing we were going to play together. It’s a very cool thing.”

Misfits: "Our skull was more well known than our music"